Matt Dewis is a 23 year old Professional triathlete who specialises in Off-road triathlon. He started racing off road triathlon in 2013 and by the end of the following year he was both Off-road Duathlon and Triathlon National Champion.

At the end of 2014 Matt traveled to Maui, Hawaii to compete in the Xterra World Championships as one of the few British professionals, where he finished 23rd.

Matt currently lives and trains in Loughborough and hopes to race a full European Xterra tour in 2016. Matt also works down at Racehub, Six Hills whom we supply with coffee.

You can find more about Matt here: http://mattdewis.weebly.com/ 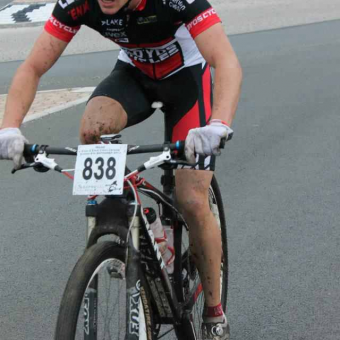 Now this may seem a bit silly on first look but I have to start with this ride as its one that still brings a massive smile to my face! It may not be the longest ride or most inventive one in history, but makes up for it with sheer fun.

This ride came about with one of my usual partners in crime Christian so a shout out to him. It started off as a long weekend in Wales taking in some of the trail centres, if you ride a mountain bike they are well worth the trip! Then the idea came, why not take a little detour and ride Snowdon. Now its worth saying you are only allowed to ride on the mountain before 10am and after 5pm so its an early start to get up and back down in that time or make sure you have plenty of light in the evening.

Now there are a few routes up and down depending on your technical ability, the Llanberis Path which is the way to ride up for both and the easier of the two to ride down. The second of these is the Ranger path which really steps it up a gear with switchbacks and steep technical boulder sections. I will attach some inks with some more information on these below. Now speaking from experience there will probably a bit of hike a bike on the way up but on the way down all I can promise is a massive smile on your face.

I would recommend taking a bike with a fair bit of suspension as we took our XC race bikes which were a bit of a handful on some of the boulder sections. So get up there and see if you can beat my KOM on the rangers path!

Sometimes you don’t have to travel far to find the best routes. This is one of my favourite routes that I do most weekends with mates. Straight out the door on the mountain bike or cross bike, no driving for hours to go round a marked trail just some good old exploring.

I was amazed what could be found in your back yard and I think you will be too. This route takes in a little road but mainly single track through sets of woods and you get a great variety of riding.

I know this will only work for people in a similar area but wherever you live get out there, explore, get lost and ride some more!

I do this with my local club and I love it! I used to just ride from my parents house which only took twenty minutes to get to the meeting point in Willington, but now I live in Loughborough I have about an hours ride to the start.

I use this early on in the season and throughout to build on that tempo speed, we probably spend four to five hours around that threshold pace with a tasty hour and a half at 21-24mph in the middle with the club. Then its the ride back to Loughborough usually with a loop to one of our favourite Cafes, one of which serves Stewarts coffee. Ive now got a little group that I train with that love joining me on this ride and mixing things up in the bunch, much to the pleasure of the usual club members.

Four full time athletes pulling the group along makes for quite fast riding and of course we have to have a few attacks along the way. No matter where you live there will be a cycling club so get down to there usual rides and join them.

I think you’ll be surprised by the depth of abilities with clubs, and now the winter months are here its much nicer to be riding in a group than on your when its chucking it down.

With what feels like a fairly mild winter so far, I’m starting to think, “whats the catch? Surely it’s going to get really cold really soon?” With that in mind talks with the coach turn to winter training camps, and escaping from the cold darks days of the UK.

If you’re lucky enough to get away this year or early next year then you will appreciate my love for riding abroad. Leaving the winter gear at home and digging your shorts out is one of my favourite things when it comes to triathlon and especially cycling. Ive seen and trained in some pretty amazing places such as Hawaii, Malta and lots of France.

That being said I think my favourite place for pure riding has to be Majorca. From about March- May Majorca seems to be the Mecca to cyclists, including major pro tour teams who flock there for there early camps. The ride file I’ve attached includes one of my favourite climbs, the infamous Sa Colabra.

This is rumoured to be Bradley Wiggins’ favourite climb and from the top you can see why. The road snakes down to the coastline with switchback after switchback, and the beauty of it is you just spin around at the bottom and get to ride up the whole thing again!

I don’t think there are many climbs that people will deliberately ride down just to go back up it but Sa Colabra is one of those.

Isle of Man End to End

No I’ve left this one till last as its definitely one of my favourites, but at the same time probably one of those rides (races in this case) that caused me a whole world of pain. I went to the isle of man in 2012 after being persuaded to race their by Christian, another person who also seems to be by my side when I do these silly rides!

Its not everyday that you get to cycle the entire length of an island. Some people are there to race and some are there just for the sheer challenge and trust me, it’s a challenge. It starts off with 12 miles on road and this is purely to space the field out and most of the way the streets are lined with spectators. After the 12 miles it swings a sharp left onto a bridleway and for the the race just exploded!

Everyone was fighting to get up that hill as to avoid as much traffic in the single track the other side. Once up on the ridge line, it follows it all the way to the end, so some fantastic single-track climbs and descends, it was on one of these that I ripped my sidewall and went from the top ten to what felt like the back end of the top 50.

Whilst on the ridge you get treated to some breathtaking views on both sides. That was until the fog and rain set in. At this point my lack of marathon racing really started to show, my legs quite literally FELL OFF! I mean this redefined the meaning of a Bonk to me. I battled with both my mind and my body for a while and after a quick feed station filled with Jelly Babies (other sugary filled, baby shaped sweets are available) I was off again.

Just the last hill that everyone had told me all about. You can see it from a few miles off which just gives you time to think “owww this is going to hurt.” Now my plan was to just get up it, this didn’t happen, there were two rider up the road that were also riding in my category I buried myself to get up to them and just had to keep pushing to drop them.

I crossed that line well and truly spent and later that evening found out I had won the Under 23 category. I’ve always said I have some unfinished business on that island so will certainly be going back soon, and i’d highly recommend it!

Kidnapped 15 years ago and brought over to Sherwood Forest, now wandering aimlessly dreaming of Alpine folklore and bearhides. Still haven't find the right kind of cheese for Fondue! In the meantime, I dabble in Graphic Design & Marketing, but I'm not too bad at numbercrunching games either. PS: I love coffee!

Basket
Most Popular Coffees
More From The Blog